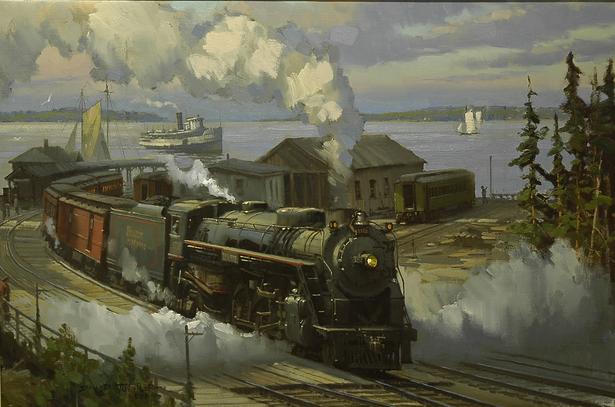 I like to see it lap the Miles—Emily Dickinson

I, too, as Peter Anastas (Enduring Gloucester, 13 April 2016), “come from the era of trains.”  In fact, my earliest understanding of Gloucester (probably 1942 or 1943) was of an enormous billboard advertising Gorton’s Codfish Cakes alongside the tracks of the Boston & Albany just outside of Boston, probably somewhere between Framingham and Natick. Little did I know that I was to move to Gloucester some sixty-five years later.

In those days, I favored sitting toward the end of the train so that I could see its full length as we went around curves—from the locomotive, the baggage and mail cars and then passenger cars. The locomotive belching black smoke and steam formed the focus of my view: perhaps a heavy Pacific, or a Hudson or, if lucky, a behemoth Berkshire pounding the earth with its immense power, perhaps let loose from a freight obligation to the West. Moreover, when sitting toward the rear, the cinders were not as aggressive, for in all but the coldest days, I sat with my head out of the window, reading the signals ahead, practicing for when I would grow up to be an engineer of a streamlined Hudson. Too, the trip was to Filene’s or Jordan’s war-limited counters with my mother. Her purpose was to buy fabric and patterns with which to make our clothing. (We could not afford off-the-hanger clothes in those days.) The real purpose of the trip was to enable my father to meet with his Ph.D. advisor at Harvard. Thus the beginning, in a way, of the train taking one to school; and which would end in my graduate days in Philadelphia. A good tradition.

We would return late in the day from Boston with cinder smuts in my eyes. Those steam locomotives that pulled my trains to Boston were unlike any of our current-day locomotives: one saw the machinery that drove those enormous wheels, pistons pushing long rods, connecting rods attaching to wheels, and at night, the firebox projecting light onto the roadbed. Whitman wrote of this power: “Thy black cylindric body, golden brass and silvery steel. / Thy ponderous side-bars, parallel and connecting rods, gyrating, shuttling at thy sides.”  In 1881, the power of the locomotive so impressed him that he termed it “Type of the modern—emblem of motion and power—pulse of the continent (“To a Locomotive in Winter”).

Today, our engines are shrouded: we don’t see their power, their gears, their turbines. All is contained.  Only their sound is left to us:  the 747 roaring into the sky, the Electro-Motive diesel thundering on the earth. Of course they are sleek and silvery; only the streamliners of the early part of the last century could compete.

Trains have been intimately connected with my education from the demise of steam in the early 50s to the Modern Era of diesel-electric traction. The great days of rail are gone, and despite Amtrak’s optimistic claims, even it is not doing very well. Yet so many years ago, when I went away to school and then to college, the railroads were still fairly strong. They were my sole means of transportation. They were my habit.

I spent most of my teens in Europe where the trains were mainly electric and fast and in Africa where the trains were hot and slow. On  returning to the States, I attended a secondary school located near the end of the New Haven’s Springfield extension. Often, I would board that train at 125th  street. My father, then teaching at Columbia, would take me up there by taxi; and in the winter twilight a tired New Haven train would depart the city, to struggle through the rest of Manhattan and into Connecticut. In the dark we crossed above the Norwalks, looking down on their empty neon streets, shining in the rain, spaces as lonely as a Hopper painting. Often, a man would burst into the car shouting out “Sandwiches, soda, candy bars!” Sometimes I would buy something. (“Ham and cheese, egg salad, ham salad. What ya want?”) The two salad sandwiches made me nervous. How long had they been sitting in his fiberboard box? How many days ago had they been made up? So, I might settle for the safety of the ham and cheese (on puffy white Wonder bread).

Later, my college fortunately was located equidistantly between two railroads; one the Pennsylvania Railroad, the other the Philadelphia and Western (the Pig and Whistle as we called it). Both originated in Philadelphia but from different terminals.  Both were an easy walk from my college. Most often, though, I took the PRR’s Paoli local, an eight-mile ride in to Philadelphia’s 30th Street Station. The local was the most ordinary of trains, day coaches that had seen much better days, but it shared the tracks with those streamlined GG1 electric trains of Raymond Lowey’s design, as they roared their way to Harrisburg. Four tracks and demanding curves could make the Main Line of the PRR a dangerous place, and locals were known to play “chicken” on its tracks. The P&W was a more like a bus, wandering though tree-lined suburbia and pleasant landscapes. In fact it looked like a bus: cream top, maroon sides, and it stopped only on command. Would-be passengers on the platform pulled a rope that turned on a signal lamp, or so one hoped. It always made me anxious: maybe the lamp had burned out.

I still ride the trains today, but they seem so different. The Acela may take the prize, for the long-distance hauls. The Lake Shore Limited and the California Zephyr have steadily declined over the past six years that I have taken them. Recently in Denver I strolled down to the head of our train, thinking to take a photograph of its Genesis locomotive with its consist trailing off into the dusk. A police officer approached,  saying, “No photographs!” She was armed, a sub sandwich in one hand, the other resting on her gun. The food in the diner that night was served on thin plastic plates and was inedible. The officer’s sandwich, even that egg salad on the New Haven in the 50s would be preferable. I ordered some more wine.

Although my school days are over, I still take the train, mostly the local commuter rail to Boston—not for education but for medicine; and once or twice a year I take the longer hauls.

We are in the 21st century. Like it or not, I must cope with the limited seat space on my flights to the West or to Europe. There’s no hopping at the command of a conductor shouting “All aboard!” Just standing and standing and taking off my shoes. But when the wind is coming from the Northwest, I do have the joy of hearing the whistle of a train as it crosses Maplewood Avenue here in Gloucester.

Eric Schoonover, Professor Emeritus of American literature and literature of the sea, now lives in a small 1735 Cape Ann cottage with his wife, a writer. His next book, Telling Tales will be published in June.

One thought on “The Trains Took Us to School”