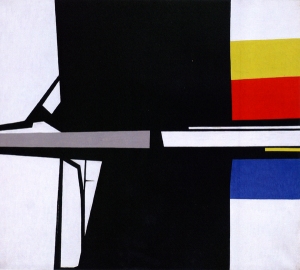 Painter and long-time Lanesville resident, Ralph Coburn, who died on June 5th in Miami at the age of 94, was an artist’s artist.  This is not to say that his “spare, beautiful, abstract art,” (Boston Globe) wasn’t appreciated by the many who came to view it at the Cape Ann Museum, Wellesley College, the Arts Club of Chicago, David Hall Gallery, or the Museum of Fine Arts in Boston, where Coburn’s innovative, geometric paintings were exhibited.   Rather, it denotes the deep appreciation that Coburn’s unique abstractions received from those who best understood the thought behind them and how they were part of an ongoing attempt of American painters to move beyond the dominant Abstract Expressionism of the 1950s.   Yet Coburn, whose work ethic was memorable and whose knowledge of art, from the frescos of Masaccio in Florence to Ellsworth Kelly’s bright, elemental abstractions, was extensive, did not insert himself into the art world in the manner of today’s careerists.

“Not enough people know about Coburn’s work, which is spare, beautiful, witty, and uncannily satisfying,” Sebastian Smee, Boston Globe art critic, wrote in 2010. “Coburn himself, I’ve been told, is modest to a fault, which is no doubt one reason why we don’t know more about him.”

I can attest to Ralph’s modesty. We met in 1986 while doing our laundry at the laundromat in Dunkin Donuts plaza in downtown Gloucester.  I might have been reading a book that Ralph commented on, or maybe it was the other way around.  A conversation began that ended with the last item of clothing removed from the drier and was taken up again the following Friday; for it was invariably on Friday mornings that we met to do the week’s wash, two aging men talking excitedly about Gertrude Stein or the latest recording of Bartok’s Quartets, while children ran between our legs and their mothers sat smoking and thumbing through tattered copies of People.   One of the most surprising moments of those early talks was our discovery that we had both been in Florence at the same time; in fact, our paths had nearly crossed in the Tuscan hill town of Settignano, where I was then living and Ralph had come to visit my neighbor, artist Susan Nevelson, daughter-in-law of the sculptor Louise Nevelson.

As far as I knew from what Ralph had disclosed, he was at the point of retiring from a job in graphic design at MIT, where he had been an architecture student before the war.  It took a long time before I learned that Ralph was actually a painter, who had been close to a group of post-war artists in Boston, many of whom had studied at the School of the Museum of Fine Arts, including Ellsworth Kelly, Bernard Chaet, and Ninon Lacey.

It turned out that Ralph was also friends with James Mellow, the Gloucester born biographer of Gertrude Stein, the Fitzgeralds, and Ernest Hemingway, whom I had met through playwright John Coyle, who spent his summers in the family home on Church Street.  Mellow and his partner Augie Capaccio had a summer cottage nearby Ralph’s home and studio in the former Folly Cove Designers barn overlooking Folly Cove.  Soon we were gathering for drinks and dinner at each other’s houses, joined by Mellow’s cousin Dr. June Mellow, a retired clinical psychologist and avid reader, and clinical social workers Peter Parsons and Helane Harris.

Those dinners became a summer routine, a night on John’s deck on Church Street, or at Augie and Jim’s, or at our house where Peter and Maria Denzer, our friends from Houston, MN prepared an unforgettable seafood risotto and the talk ranged from who was doing what in art to Mellow’s National Book Award for his biography of Nathaniel Hawthorne, which reviewer John Updike had called “the finest biography ever written” about the novelist of Salem’s dark secrets.

If Ralph had been modest about his art, which we were finally to experience when we were invited to his house for dinner, he was even more modest about his cooking.   That first night—there would be many others—Ralph, who had spent a great deal of time in France, prepared a fish soup of white fish in a clear broth with fresh vegetables and herbs.  Everyone pronounced it “exquisite.”  But that was only the prelude to the dishes that Ralph would cook for us on subsequent evenings.

Ralph and I shared a love of Modernist music, not to exclude Mahler, and the novels of Andre Gide.  Ralph was also a lifelong jazz fan, having spent countless nights at George Wein’s Storyville Club in Boston, while a student at MIT and later working at Boris Mirski’s gallery of vanguard art on Newbury Street. He greatly admired the playing of another Gloucester native, trumpeter and orchestra leader Herb Pomeroy.

What Ralph did not talk about much was his art—he merely did it, carefully and painstakingly, day after day, year after year, without the thought of recognition.  It was thrilling to see the paintings emerge.

Thinking back to the time we spent together, which now seems never to have been enough, I remember most our laundromat days, when we talked non-stop about art and life, while our clothing whirled in the driers and the children ran and jumped around us.