All of us have complicated lives that consist of varied activities, work, and interests.

I know little about Fred Buck’s family life, his life as a musician or even Fred Buck’s footsteps as a letter carrier immortalized by his friend, Willie Alexander, in a song by that name.  What I do know about is that he was photo archivist extraordinaire at the Cape Ann Museum and that I was the beneficiary of his emails.

More than ten years ago I was working on a book, Antique Houses of Gloucester, to be published by History Press.  What was necessary for the success of the book was access to the old photos of the houses that were hidden away at the Cape Ann Museum.

For some time Fred had been unearthing the boxes and stacks of old glass plate negatives that had not seen the light of day for who knows how long.  Fred tackled the huge job of scanning and identifying the collection; a seemingly never-ending job that would go on for years.

In the early 1880s, a team of photographers by the name of Corliss and Ryan came to Gloucester and photographed most of the houses in central Gloucester, the so-called Harbor Village, and the subject of my book.

Fred began searching for the houses on my list and as he emailed them to me the following pattern emerged.

Fred apparently was a true night owl.  I am a morning person.  So Fred, in the middle of the night, would email me a needed image.  Just a couple of hours later I would be starting my day in which the first order of business was checking my email.  An email from Fred would begin my day with a smile.  I couldn’t wait to see what fabulous antique images were attached to those emails! There was a steady flow. 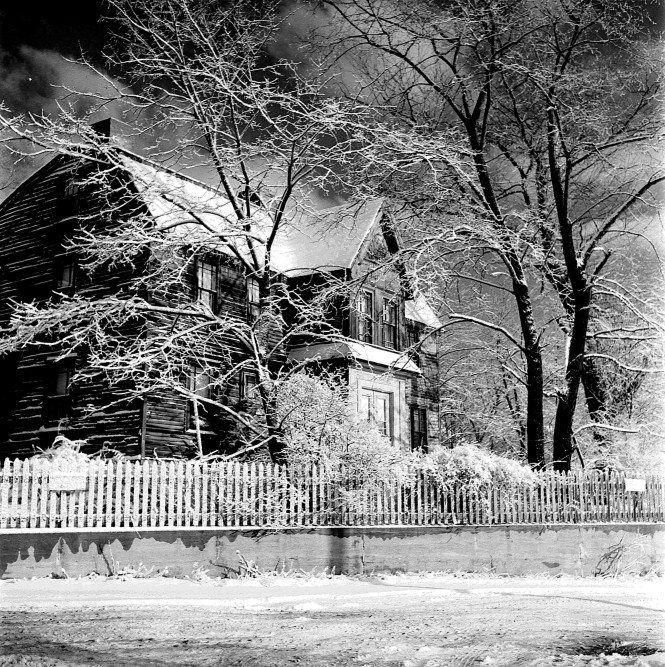 The old Center house near the tracks on Washington Street in the snow. Circa 1950s.

But there was more.  The images for the book had to be put on a disk in the right order.  Some of my newer photos had to be tweaked to bring them up to the publisher’s standards.  Fred saw to it that everything was in good order and it was.  The publisher commented that the photos were perfect in quality and in order.  No additional tweaking was necessary.

With the book completed the email connection to Fred and the museum continued.  By this time Fred knew that there were certain houses I was interested in and he was always on the lookout for them.  One of these, the Jonathan Ober house, near Short and Main, tucked in the back but long gone was never found.  It showed up on Facebook last week!

Another house had eluded me for years.  The house had been moved, recently demolished and no one knew its original location.  Eventually, I discovered the location on Prospect St. and Fred found the picture in time to insert it in my book.

The old Elwell house moved from 96 Prospect Street to Fair Street in the 1890s and demolished circa 1990.

Fred and Willie Alexander were great friends.  Willie lived on School St. in a Victorian house.  There was something odd about the foundation in the basement.  It didn’t quite match the house.  What was going on?

Fred went with me to the home of Willie and his wife, Annie Rearick.  We went down into the cellar and I quickly recognized the problem. 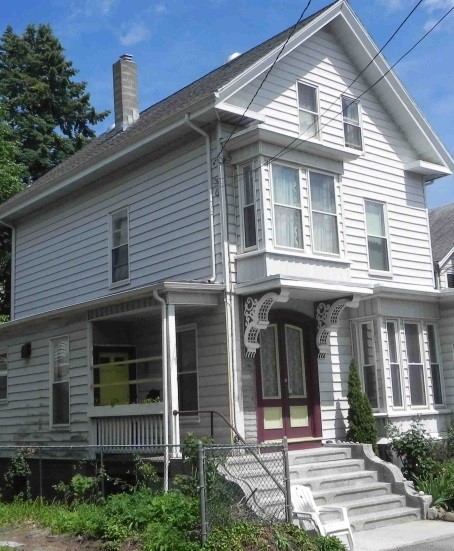 The house moved from Mason St. to the site of the Proprietor’s School House on School Street to make way for Central Grammar.

In the early 19th century the elite of Gloucester sought a better school for their children and built what was called the Proprietor’s School House for which the street is still named.  After a number of years, it was no longer needed.  It was converted to tenements and its condition and reputation went downhill until it was an eyesore and a public nuisance. Eventually, to everyone’s relief, it was demolished.

Meanwhile, Gloucester High School nearby on Mason St. burned.  Plans to build Central Grammar on the site required the acquisition of more property.  One these properties consisted of land with a house.  In order to get the house out of the way for the school construction it was moved to School Street by house mover, John S. Parsons, and with adjustments was relocated on the old foundation of the Proprietors School House, now home to the Alexanders.  Thus, one more quirky story in Gloucester’s long history of Yankee ingenuity and house moving was explained.

I had long been looking for information about an ancient gambrel-roofed house that had stood with its gable end on Washington St. facing the train track.  I remembered it from my youth but it was gone.  It had belonged in the Center family. Not so long ago in an early morning email came a photo with the query from Fred, “Is this the one you’re looking for.”  Yes!  It was! 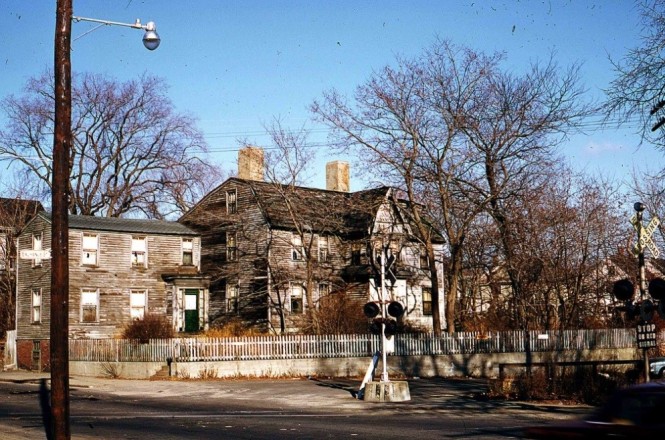 Deviating from old photos and glass plate negatives, one morning Fred sent a scan of a 19th century watercolor of a gambrel-roofed “Cape Ann Cottage.” The ancient house was on its last legs even in the 19th century.  A label stated that it was Mr. Griffin’s house near Plum Cove.  I had no idea where this house was but I sure wanted to know!  It couldn’t possibly be still standing.  There were outcroppings of rocks in the yard of the house and I searched trying to pin down a location with similar outcroppings.

Right out of the blue one day when I was on duty at the White-Ellery house a homeowner struck up a conversation with me and told me where she lived near Plum Cove.  She then went on to tell me that Barbara Erkkila had talked about an Englishman named William Northway who had built her house in the 1870s, reporting that there was evidence of an old foundation, chimney base and a possible threshold in the cellar of the Victorian house.  This homeowner will never forget the look on my face and my excitement at this scrap of information.  She couldn’t understand why I was so elated.

I couldn’t wait to get to my computer to research the deeds. I was not disappointed.  The deeds went straight back to Austin Griffin of Lanesville.  Ultimately the deeds took me back to the mid-18th century and the Sargent family who owned much of the land between Hodgkins Cove and Plum Cove.  The details fleshed out from deeds and probate records portrayed much about the life of the Peter Sargent family and his widow, Lucy Sargent, and how she shared the house with other heirs in a life of hardship but not atypical of 18th-century life of an average family. 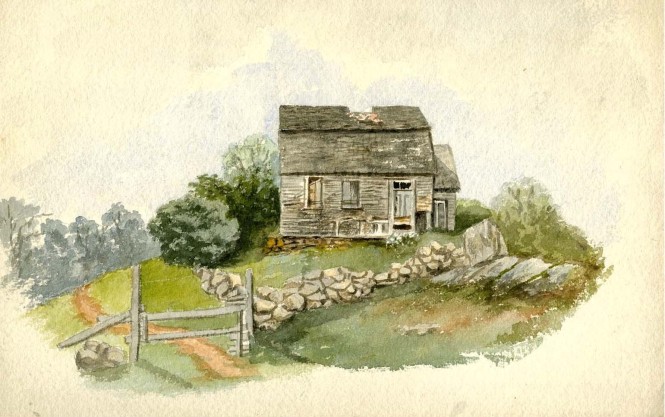 The Sargent family built this house near Plum Cove in the 18th century. After more than 100 years, this is how it looked. Goodbye old house!

That mystery solved, Fred then sent me the scan of another Cape Ann Cottage portrayed in a watercolor belonging to Greg Gibson.  This watercolor depicts a charming old cottage larger than most with a central chimney.  Is that an old road sweeping past the house?  And is that a peek at blue water on the left side of the house?

This one, one of about 300 in the 18th century, remains a loose end, a mystery house.  It may never be identified because these small cottages were vulnerable to time or changes making them impossible to find or identify.

Small unidentified Cape Ann Cottage, a left over from the 18th century.

Occasionally, when Fred emailed a 19th-century photo I would be really stumped and would call on my friend, Peggy Flavin for help.  No one is more determined than Peggy to identify or find a gem of a house, shabby but with a story to tell.  She was more than happy to join in the search.  Peggy and I would drive all over town looking for clues to a mystery photo.  More often than not we were successful but not always.  Some are still eluding us.

A few days ago the subject of an old house on Gee Ave was being discussed on Facebook.  It was not the first time on Facebook that readers have submitted house photos that always evoke lively discussion.  The house has been changed dramatically but thanks to Fred I know what it originally looked like and the changes that have taken place. 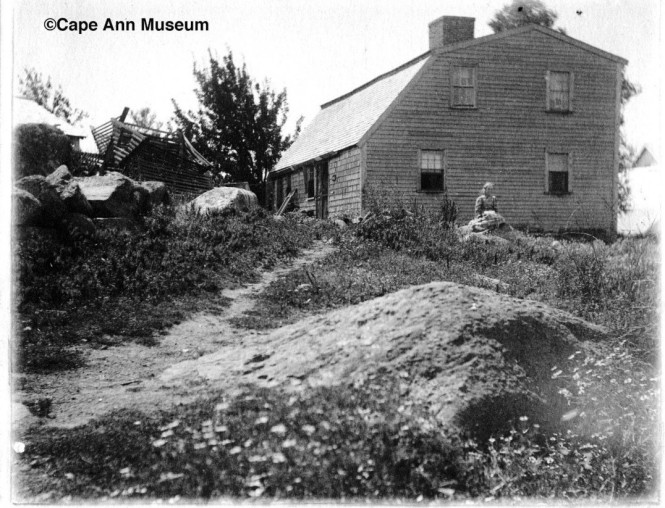 The Old Castle near the end of Gee Ave. Originally a Cape Ann Cottage in the Bennett family the front was raised to a full two stories. Later the rear was altered until lines of the Cape Ann cottage were no longer visible

I won’t soon forget the last time I saw Fred a few months ago.

Helen McCabe and I had gone to the basement of the museum to work with old assessors’ record stored there.  We were researching records in hopes of dating a house for a historic plaque.

At 1:00 PM we thought we should leave so we climbed the stairs to the lower level of the museum only to find that we were locked in the basement stairwell.  My cell phone was dead and Helen’s phone was at home.

Then the door opened and there stood Fred with Stephanie right behind him laughing like crazy.  I will always remember Fred’s amused and smiling expression as we recovered and joined in the laughter.

Fred Buck’s early morning emails have been a very bright spot in the life of this old house preservationist and will be sorely missed.  I like to think that Fred thought it was as much fun for him as it was for me.

Prudence Fish, of Lanesville, is a published author and expert on antique New England houses. Read Prudence Fish’s blog, Antique Houses of Gloucester and Beyond.