To celebrate the Cape Ann Museum’s exhibition Charles Movalli: Cape Ann & Beyond,  we asked Dennis Poirier to share some thoughts on his mentor and friend.

I met Charlie for the first time on the steps of the gallery of Aldro Hibbard, in Rockport.  I was at that time renting the house from Mrs. Hibbard. It was a perfect place to meet him really. I moved to Maine soon after and it was to be many years later, in 2000, that I would see him again.

I was now showing at Bird’s Nest gallery in Bar Harbor, Maine. I had been painting with Mike Graves, and a group from Gloucester came up to paint too. The group included Dale Ratcliff, Carleen Muniz, Ramona Murray and a few others. Charlie came up in the fall of that season, when we all had dinner in October. Dale contacted me that she wanted to buy one of my small paintings of Gloucester that had been at Bird’s Nest gallery because it caught Charlie’s eye. I was thrilled that he wanted to own one of my paintings!  A few months later, I was at a show at the Rockport Art Association and he told me that he loved having it in his “Gloucester” collection. I was so pleased to hear that.

I invited Dale and Charlie to come up to Maine and visit a local artist named Charles Andres. Dale told me that Charlie really enjoyed that visit since he was such a terrific writer of art history. Mr. Andres was a student of the great Harvey Dunn. He also had helped out on the book about Dean Cornwell. In his home he had original works by Dunn, Von Schmidt, and many beautiful Dean Cornwell paintings and drawings.  Charles Andres work was also on his walls of course.  I loved going to visit him, so I enjoyed sharing this with my art friends too! Don Stone also enjoyed meeting Charles Andres. It was like a museum of Golden age illustration!

Charlie and Dale once took me to breakfast after I had been rejected from the Rockport Art Association, in 2001 or 2002. Charlie predicted that I would win awards at Rockport and he turned out to be right. I have won more times at Rockport than at North Shore Arts in Gloucester where I grew up!

In 2013, I fell and broke my right wrist. I taught myself to paint left handed during my recovery. When Charlie broke his right arm my pal Caleb told him how I had painted lefty. Charlie emailed me and I told him, “Yes, try it!”  Sadly, it was my last email from him.

I was pretty blown away when Dale sent me a Christmas card with that final painting he worked on with his left hand. I enjoyed seeing it in the show at Cape Ann.

Just one thing more: Being half Sicilian (my mom was a Scandalito) I have what I like to call my Italian connection of artists, now all passed away— Joseph Santoro , Salvatore Grasso, Rudy Colao, and of course Charlie Movalli. All these men were very supportive, helpful and inspiring to me and all were good friends.  I sure miss them all.

Dennis Poirier grew up in Gloucester, Massachusetts. The colors, sights, and sounds of the busy port and fishing fleet inspired Dennis to paint.
Dennis began his studies in high school and then went to Butera School of Art in Boston. He returned to Cape Ann to become the first student studying the Atelier System with John C. Terelak and Ted Goerschner at the newly formed Gloucester Academy of Fine Arts.  Later he moved to New York City to study at the Art Students League, winning the Charles J. Romans Memorial Award at his very first national exhibit at the Allied Artists of America Show. Dennis is a member of the North Shore Arts Association, and Rockport Art Association. 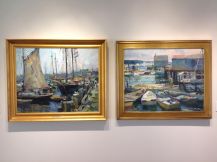 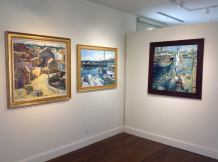 At the Cape Ann Museum on Saturday, April 22 at 2 p.m., a panel discussion, moderated by Sinikka Nogelo, artist and former host of the Cape Ann Report, and including friends, students and colleagues of Charles Movalli, will reflect on his amazing life and career. Panelists will include T.M. Nicholas, Mike Graves, Dennis Poirier, Charles Shurcliff, Marilyn Swift and Tom Gill.

One thought on “Remembering Charlie Movalli”