“Let us hold back the world that is banging at our door, threatening to engulf and overwhelm us with its false promises of progress.”

Forty-four years ago, the late Gloucester writer and historian Joe Garland gave a talk at the Cape Ann Historical Association (now the Cape Ann Museum) as part of Gloucester’s celebration of the city’s 350th anniversary.   In his talk, Garland looked back at the city’s rich maritime history and forward to what he projected might be our future.  The text of Garland’s talk was printed in full in the Gloucester Times, headlined, “Garland calls on Gloucester to ‘hold back the world.’”  To remember Garland’s death five years ago, and to suggest how prescient his words were, Enduring  Gloucester presents the following excerpts from his talk. 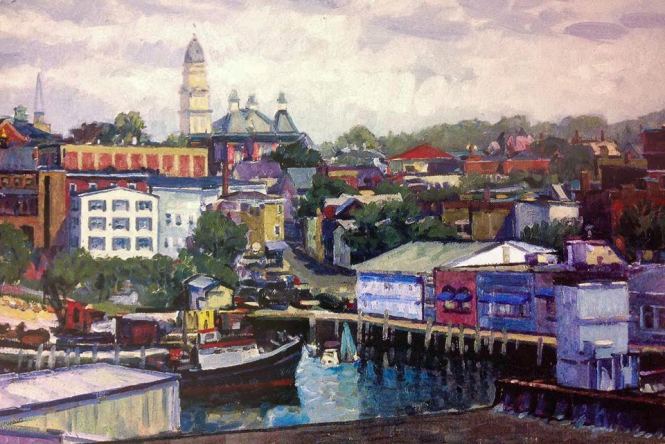 Climb up by Lane’s stone studio on the rise of Duncan’s today and look out over the harbor and the city, and you are bound to complain or thank God  that Gloucester has remained pretty much the same old Gloucester.  No plywood skyscrapers here.

Here in Gloucester, I say, let us resist change.  Let us stand pat and defend ourselves against it with all the underlying sullenness and apathy at our command.

Let us hold back the world that is banging at our door, threatening to engulf and overwhelm us with its false promises of progress.

Our roads are constipated with cars and trucks and motorcycles, and our waters with Clorox-bottle boats.  Our roadsides, our fields, our commons, our woods, our parks, our marshes, our waterfront and our beaches are one continuous, ever-replenishing dump.

Our atmosphere, way out here at sea as we are, reeks with the eye- smarting stink of gasoline and diesel exhaust fumes, and the song of the warbler in the treetop is fractured by the vapid racket of the joyrider.

Why on earth must we grow?  Who says we have to?  To what end and for what purpose?  To line whose pockets?  To serve whose self-interest must we bring more and more and more people to Cape Ann?

Let us protect our open spaces with iron-fisted jealousy.  Let us throw every obstacle that enlightened paranoia can invent in the way of the further expansion of the tourist business.  Let us recycle all remaining copies of The Gloucester Guide [Garland’s own book] Oh, those trippers!  They’re a plague and a blight; let us put them to flight.

If our future depends on tourists, then we are selling our birthright for one big mess.  As for the backpackers and their bicycles, why not?

The point is that there is plenty of slack to be taken up within the limits of our present population level.   For one thing, year round industrial diversification can rid us of that depressing combination of involuntary servitude and low aspiration, which characterizes the seasonal employment pattern of tourism and sectors of the fish processing industries.  There is lots of room here for upward movement into stable well-paying jobs with self-respect and challenge to them, without moving to any great extent out of the Gloucester labor market.

A principal reason why our unemployment is so high, it strikes me, is the super-high number of junk jobs in town.  Faced with the choice, I’d be tempted to “collect,” as they say, myself.

The availability of higher quality jobs raises personal income, purchasing power and aspirations, stimulates interest in better education and local government, which leads to a demand for better services, which leads to a better life, and who knows where that may lead? Even maybe to an addition to the library in our lifetimes.

But always I am drawn back to the harbor.  It’s our heart, as it’s always been, and our future.  Depending upon the eventual success of a marine resources management program in reversing the trend of depletion in the fisheries—and it will succeed because it is too important to the race to fail—we can look to that same prospect for an interesting future in our most ancient industry.

If we can stick with it and hold on, there is bound to be a resurgence of fresh fishing from Gloucester, which can revive us as a major port for the capturing and marketing of what is coming to be more widely recognized as the healthiest protein in the human diet.

Probably a dose of protectionism applied in the right places wouldn’t hurt.  This country needs its own fishing sanctuaries, and urgently, and its own domestic fleet to fish them; the one will follow on the other, as it always has, but the government must provide the shield.

For Gloucester the game is never up.  We here now are the legatee for a moment in time, of a rare place on earth.  Nowhere in the Western Hemisphere, perhaps, has the inheritance of so single minded a pursuit and so singular a way of life been passed from hand to hand in such an unbroken continuity as here.

And very few communities anywhere in the world can match our tradition of local self-government, a companion legacy not at all unrelated to the spirit of the fisherman, which has been kept alive here for 331 years since our incorporation as a town in 1642.

These twin preoccupations of ours, fishing and freedom, have always thriven on adversity.  If this generation keeps the sparks flying and afire, the future of old Gloucester can, and most likely will, take care of itself for quite a few more years to come.