The Boston and Maine trains played an integral role in my summer vacations in Gloucester.  Now after reading the pieces written by Peter Anastas and Eric Schoonover I wondered if Enduring Gloucester’s readers could stand one more train story!  I hesitated then decided to take a chance. Trains seem to have played a memorable role in the lives of my generation.

Each summer my mother and I would take the train from my small hometown in central Massachusetts to rendezvous in Boston at North Station with “Auntie” with whom I would spend my long awaited summer vacation days in Lanesville and Folly Cove.

While in Boston we shopped at Jordan Marsh and Filene’s for a new bathing suit for me and a new dress and shoes for the first day of school in September.  Then if I was lucky enough we might visit to Jack’s Joke Shop before riding the subway back to North Station and the Rockport line at Track 2. There I would say good-by to Mother and board the train to Gloucester with Auntie. In the early years engines were formidable, behemoth locomotives belching clouds of black smoke, later replaced by streamlined diesels. 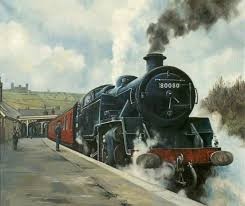 My happy anticipation grew as we left the cities of Boston and Lynn behind and approached the Salem station.  At that point in our journey the lights were turned on in the passenger cars.  I knew what that meant. We were about to enter the tunnel.  How exciting that was to a four or five year old!

That event was followed by a sharp change in scenery.  After leaving the Beverly station there were glimpses of big houses, and blue ocean water.  And what was that funny sounding station…Montserrat? That stop was followed by Beverly Farms and Pride’s Crossing; then Manchester with sail boats in the harbor.

After passing the Lily Pond and the West Gloucester station, none too soon for me, the conductor would call out, “Gloucester, Gloucester.”

As we alighted from the train the familiar sights, sounds and smells left no doubt that we were really in Gloucester. Auntie and I then proceeded out to Washington Street to wait for the bus with me sitting on my suitcase in front of the Depot Café to wait for those big orange busses of the Gloucester Autobus Co.  We must watch for the bus that said “Lanesville, Folly Cove.”  That was very important. 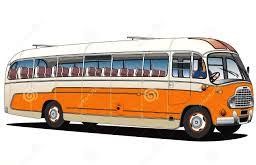 Heaven forbid that we get on the wrong bus!

While impatiently waiting on the sidewalk I stared at the big house on the corner of Commonwealth Avenue and thought it was quite wonderful.  It was almost new then.  It is still wonderful but, like me, showing its age.

The landscape soon became more and more familiar.  As the bus made its way along Washington Street Auntie, always a teacher, pointed out the old Ellery house and, on the opposite side of the road, the big yellow Babson house.  The construction of the rotary, Route 128 and the A. Piatt Andrew Bridge were still a distant idea.  Little did I know that these historical landmarks pointed out to me as a child would be so important to me as an avid preservationist many decades later.

Way down the road we traveled under the Riverdale Willows, saw the abandoned Hodgkins Tide Mill and crossed the causeway to Annisquam.  After a few more miles we passed the Consolidated Lobster Company at Hodgkins Cove. I was told with a slight tone of disapproval that their lobsters came from Nova Scotia and not as good as our Ipswich Bay lobsters.  Our lobsters would come from George Morey at Lanes Cove.

Shortly thereafter we went down one last hill and there was Plum Cove and the sandy beach!  Oh happy day! We’re almost there.

After stops in Lanesville the big orange bus traveled down Langsford Street until it approached Butman Avenue and Ranta’s Market.  It was extremely important to pull the overhead cord at just the right moment to tell the driver we wanted to get off, not too soon and not too late.

From there it was a short walk with Auntie dragging my suitcase (without wheels of course) up Butman Avenue to Washington Street after which it was downhill to Auntie’s house. The magic of my summer vacations was about to begin.

Every day was filled with fun at Plum Cove or Folly Cove.  Cloudy days were fun, too, with hikes through the woods on the Rockport Path to the Paper House in Pigeon Cove, picking blueberries, walking to Dogtown or a bus trip to Rocky Neck.  On Rocky Neck there was a wonderful shop that I loved called the La Petite Gallery.  Other trips to Bearskin Neck or shopping in downtown Gloucester filled the long summer days.  One trip to downtown each summer always included a stop at Gloucester’s vast City Hall so Auntie could pay her taxes.

It was with great sadness that at the end of August the trip by bus and train was reversed.  I huddled by the window hiding my face so no one would see my tears.  Next summer was such a long way off.

Every detail is forever burned in my brain.  Little did I know that Gloucester would become my permanent residence and that I would be living in Auntie’s house or that my children and grandchildren would also know the magic of summer in Lanesville.

Little did I know that in the warmer months I would be standing in the now so- called 1710 White-Ellery house, no longer across the road from the old yellow Babson house.  The ancient house is now located behind the Babson house and here is where once a month  in the summer I tell  visitors about the construction of the house and explain to them how it was moved across the road in 1947 to save it from demolition as Route 128 became a reality..

And that is where I was on the first Saturday in June as another summer on Cape Ann begins.

Prudence Fish, of Lanesville, is a published author and expert on antique New England houses. Read Prudence Fish’s blog, Antique Houses of Gloucester and Beyond.

4 thoughts on “TRAINS, BUSES AND SUMMER ON CAPE ANN”