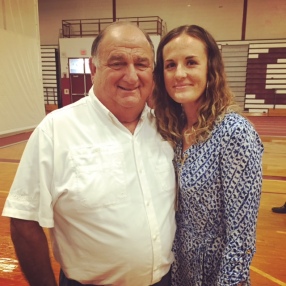 I still remember the first drill I did with Lisa Olson my freshman year in the old gym at Gloucester High School.  Coach Olson stood at the baseline and rolled the ball out towards half court.  Battling one another, Erika Brown and I charged for the rock looking to score on the other end.   Junior versus freshman. All was fair game.  I loved that drill.  I loved that gym, with its amazing hardwood floors and local history.  I loved how many people crammed into that small arena to watch our boys and girls play basketball.  Khris Silveria and Paula Ryan were my hometown heroes.

But my love for the game did not start here. In fact, it came much earlier.  Somewhere between having CYO practices in the tiny Magnolia Library and going to open gym with all the boys at the Cape Ann YMCA, I fell in love.  To me there was no better feeling than blocking an opponent, finding a wide open teammate on the opposite block or making an unexpected steal that led to an easy lay-up off the fast break.  Although, my all time favorite feeling was the sound that echoed from the hoop after making a “nothing but net swoosh.” That WHITHTHTHTHPPP.  Some of you know the exact sound that I am referring to.  And hearing a swoosh on a chain net, well forget about it….

Simply put, I felt good playing basketball.  So I played whenever and wherever I could get gym time.  The size of the court did not matter.  Nor did the gender or age of my opponents.  I shot my heart out whenever I could.  But my personal drive could only take my passion for the game so far.  I was blessed to be supported by an extraordinary family and an equally dedicated and diverse group of coaching influences.

My mother and father brought me to every practice, game, and AAU tournament in Massachusetts and beyond.  And they did so with smiles on their faces. They supported my wishes to attend camps all over New England and most importantly, talked me off that ledge when I had an awful game.  Their unwavering support for their daughter, would help number 21 to score 30 points after only netting 3 in the game before.

While there have been countless individuals who influenced me during my basketball career, three definitely stand out for helping me to take my game to the next level. Rich Langan, pushed me to become a better post-player, first as my AAU coach and later here, in the gym of the Benjamin Smith Field House as head coach.  Not all players clicked with Rich, but I am one of the lucky ones who did, and his influence motivated me to play this game far beyond its winter season.  Alex “Pep” Borge had a profound influence on my life.  In 6th grade I played for Pep in the Cape Ann YMCA boys league.  Pep’s positive outlook and joyous attitude were infectious.  He made this game fun for me, a gift that every coach should give its players.  I credit Pep for helping me to become the optimist that I am today.

Anyone that is close to me knows how much I love to get yelled at by “old men.”  Why else would I torture myself with the presence of Joe Billante for so long?  All jokes aside, Joe is one of the greatest coaches I know.  No one knows more about the game than Joe B.  And his philosophy is simple.  Fundamentals first and practice makes perfect.  He values the player that works hard.  He values the player that hustles.  Most importantly, Joe B. gives his heart to every player that he works with.  Joe B. has taught me the true value of passion and that if you love what you do, than life will always be worthwhile.

The confidence and courage I found on the hardwood has transferred over to college classrooms, interviews, and eventually parenthood.  Ball taught me how to think quick, be strong, and trust others.  My parents and coaches, like Joe B., reinforced the value of preparation, practice and positivity.  So having my name hang in this gym, and now on the Hall of Fame Wall means more to me than you can imagine.  I want future generations of girls who have hoop dreams to see the name “Lori Sanborn” and hopefully believe that they can be better than me if they really work hard. This should be the mentality of all aspiring athletes, not to be ‘as good as’ but rather, to be ‘better than.’  And if I am really lucky, maybe my own daughter will be able to out-perform her Mom one day.  We just need her to choose sneaks over heels first. 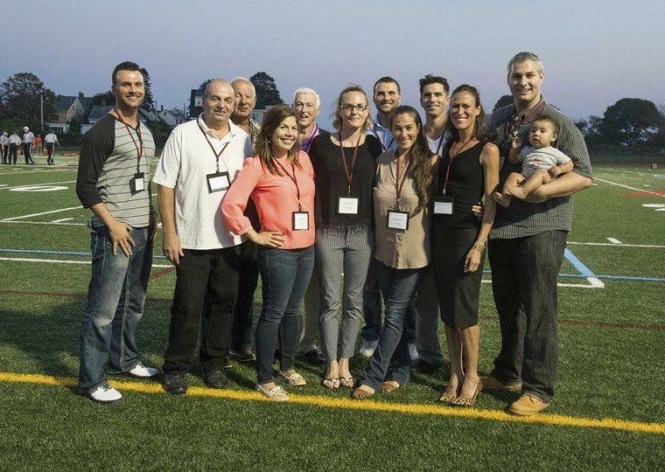 From the bottom of my heart, thank you to the Hall of Fame Committee for choosing me to be among this talented group of male and female athletes and coaches inducted into the 2015 Hall of Fame class.  I will never forget the four years that I played for the Gloucester Girls Basketball program or the teammates that helped me to reach such an accolade. Once again, I have found myself completely humbled by hoops. 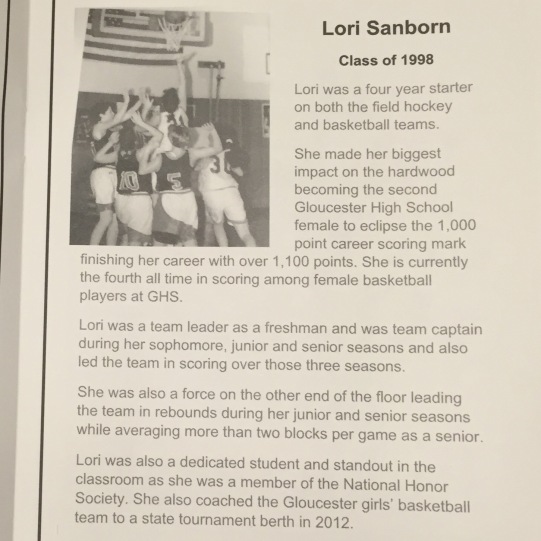 Lori Sanborn was born in Gloucester and returned to live permanently in our seaside community three years ago. She has been a public educator for 12 years,  teaching eighth graders.  Lori is most proud of her role as mother to her children, Emerson and Ryder.

2 thoughts on “Humbled by Hoops by Lori Sanborn” 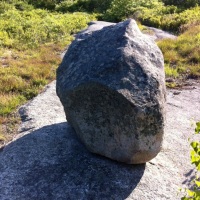