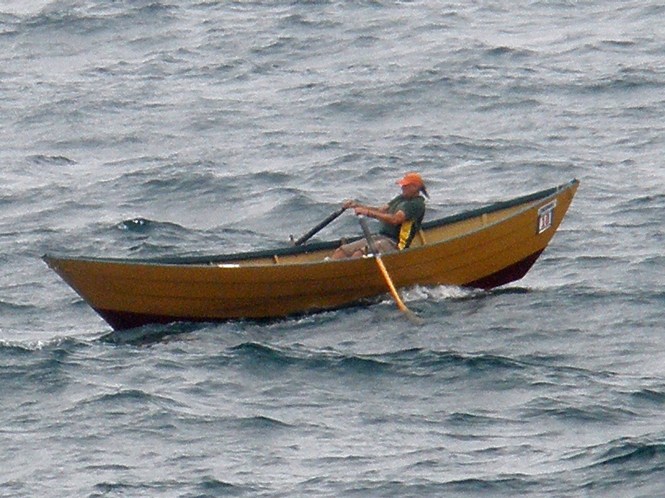 Enduring Gloucester Contributor  Jimmy Tarantino completed the 22-mile Blackburn Challenge today, rowing alone in a Grand Banks dory, as a tribute to the great Gloucester doryman Howard Blackburn, for whom the race is named.

Tarantino said, before the race, ” I am one of hundreds of rowers and paddlers blessed with the physical ability to be able to compete in the Cape Ann Rowing Club Blackburn Challenge tomorrow. In tribute to Gloucester’s maritime heritage and the great Howard Blackburn himself, I choose to row alone in a Grand Banks Dory. Should Mother Nature smile and provide a fair wind, lifted by the love and support of friends and family, I aspire.”

Rough conditions this morning forced almost 50 of the over 200 registered rowers and paddlers  to forgo the race or turn back within the first few miles.  Tarantino not only completed the course,  but stopped to help two paddlers floundering in the water after their 20-foot outrigger canoe was swamped by the five-to-six-foot waves a few yards from the rocks at  Andrews Point, just before the 8-mile mark at Halibut Point.

“I threw them my stern line and told them to grab it if they didn’t want to get slammed up against the rocks. ” Tarantino said. ” I was thinking of coming in myself,  but then I saw my friend Chad Johnson coming up in the Harbormaster’s boat, and he took care of them from there. I saw five or six boats capsized out there. It was pretty sloppy. The Harbormaster was busy.” 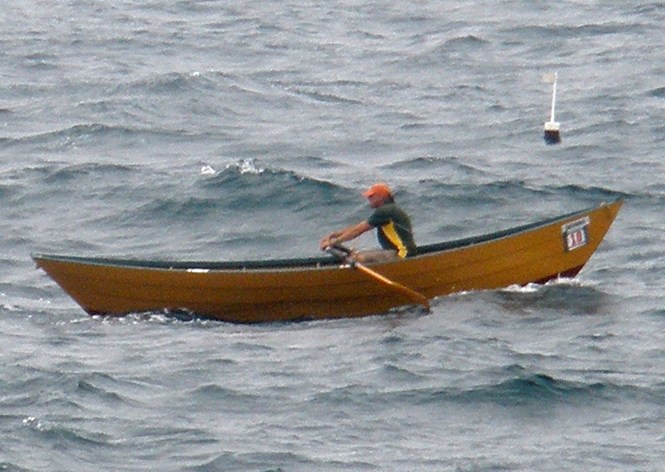 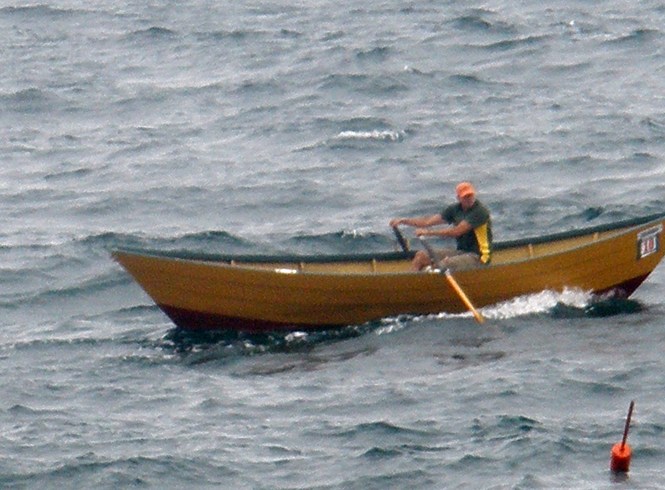 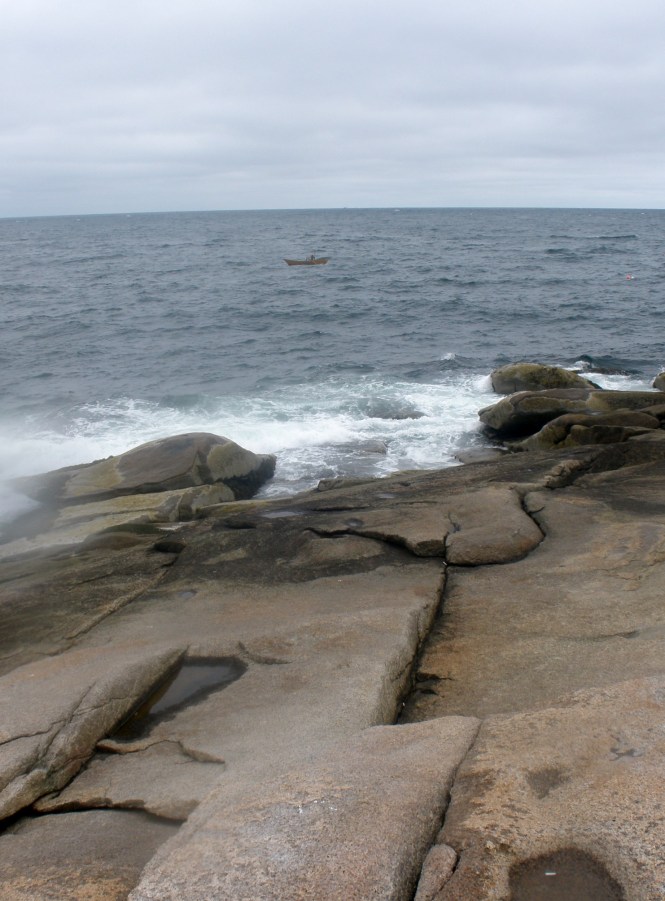 Lanesville’s Damon Cummings, helping out with the race in his motor skiff at Lane’s Cove, as he does every year, reported that 34 people in all were pulled from the water today.

After the race, Tarantino, who chose to row alone to honor Blackburn, the “Lone Voyager” said that what kept him going was not so much his solitary will, but the support of all the people- friends, family and acquaintances- who wished him well, and encouraged him, who came out to cheer him on.  “If they could believe in me, I had to believe in myself, ” he said.

“And all the other rowers out there alongside me today. They were inspirational. Two men older than myself really impressed me. Fenton Cunningham and Russell Atkinson are in their 60s. They  came down from Clarke Harbor in Nova Scotia to row with us today, and they finished in an amazing four hours and nine minutes- an hour faster than men half their age. that’s the kind of enduring spirit I’m talking about. That’s tradition. That’s community,” Tarantino said.

From the website of the Cape Ann Rowing Club, sponsors of the race:

The event both celebrates and helps to keep alive the story of Howard Blackburn’s desperate mid-winter 1883 rowing of a small fishing dory from the Burgeo Bank fishing grounds to refuge on the south coast of Newfoundland. Blackburn and his dorymate Thomas Welch had become separated from the Gloucester fishing schooner Grace L. Fears during a sudden squall and found themselves nearly sixty miles from the nearest land. Over the course of the ensuing five-day ordeal, Welch would give up and succumb to a merciful death, whereas Blackburn would allow his bare hands to freeze to the shape of the oars, and row until he reached land.

Though Blackburn survived he ultimately suffered the loss of most of his fingers and toes due to frostbite. In spite of his handicap, he later went on to twice sail solo across the Atlantic Ocean, earning himself the title “The Fingerless Navigator”. His story is told in Joseph E. Garland’s “Lone Voyager”.

3 thoughts on “The Blackburn Was a Challenge!”