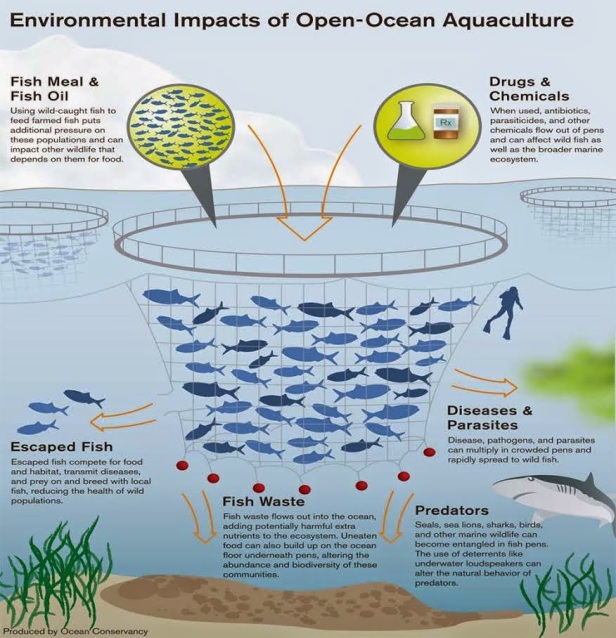 Some say YES:
from the Boston Globe, Dec 3, 2014
The Future of Gloucester Could be in Biotech
Shirley Leung
“Serial entrepreneur Greg Verdine, Eastern Point,  is … exploring the idea of Gloucester raising its own fish. Over the summer, he and (former mayor Carolyn) Kirk visited fish farms in Japan. The types of species that could thrive in Gloucester Harbor will depend on the water temperature, and a team from Japan will come in the spring to help sort that out. …
‘It’s opening another channel to bring fish across the docks of Gloucester,’ said Kirk.”
Some say NO:
Ann (Parco) Molloy is director of marketing and sales at Gloucester’s Neptune’s Harvest, makers of organic fish fertilizer since 1986. The company depends on the by-product of high quality local fish to make its very effective and popular organic fertilizer. She has a few things to say about aquaculture:
“Farm-raised fish are not healthy fish. They are raised in pens where they can’t swim in the wild, so they become weak and sick. They are routinely fed on genetically-modified soy feed which results in questionable nutritional value of the fish itself, and when they inevitably get sick, they are fed antibiotics.
Any genetically modified Farmed Fish, raised in pens, have the chance of escaping into the wild, where they can cross-breed with local wild fish,risking the local wild stocks. When the genomes are compromised like this, you could lose a wild species forever. “I wish people would stop thinking they can outsmart, and do things better, than Mother Nature. We have the best fishing grounds in the world. Why would we want to risk losing them, for any reason? Do they want to raise fish inshore and onshore so they can get the fishermen, who are the eyes and ears of the ocean, off of it? Then big corporations can have their way it, mining it, and extracting whatever they can from it? The oceans were meant to feed the world, not feed greed!”
I won’t eat farm-raised fish. It’s not nutritious at all, and can actually be bad for you. We won’t even use it for our fertilizer.”
See how Nova Scotia is doing with its offshore fish-farming:
click here