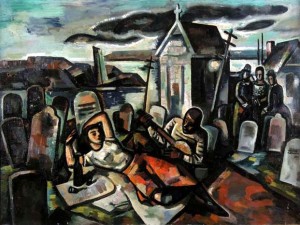 “A black drug dealer almost certainly killed his white girlfriend, then got killed himself by a police officer during an armed robbery.  What could I possibly hope to accomplish by writing that story?  Nothing. I had to shape meaning out of what seemed be to meaningless violence.”

Among a writer’s books there are those that come to us naturally.  But almost always there is another kind of book. It is not the book we write, but the book that writes us.  We may be at the keyboard or with pen in hand, but there is another force driving us to put down words on a page. It may be a voice from the past urging us on, or the pressure of a traumatic event, the outlines of which are still unclear.  It may be a story we have long wanted to tell, if only we could find a way to tell it, or we could discover certain details that have remained hidden or even unknown to us.

When we do tell this story, we often discover that it is a story as much about ourselves as its elusive subject or characters.   Often we find out that we are trying to learn more about who we were at the time of the story and, as a consequence of the telling, who we are now—who we have become.   Hence, we are written as we write.

This is one of the themes of Gloucester writer JoeAnn Hart’s stunning new book, Stamford ’76, published in April by the University of Iowa Press. 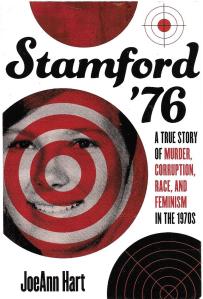 It is a book that works on many levels.  As memoir, Hart is writing about herself and her nuclear family in the context of an interracial relationship she embarked on after dropping out of college in 1975, at the age of 18, and moving to Stamford, Connecticut, where she found work in bars and restaurants, and eventually in a bank.

Stamford ’76 can also be read as a true crime story.  Hart and her black lover, Joe Louis, were friends with another interracial couple, both of whom died violent deaths.  The white woman, 24 year old Margo Olson, was found in a shallow grave in an abandoned potter’s field in Stamford, her heart pierced by a steel arrowhead.  Her partner Howie, who may have killed her, died at the hands of police during a botched liquor store robbery.  The circumstances of their deaths remained a mystery that haunted Hart for decades.

As Hart writes: “Leaving behind the memory of Margo had meant forgetting parts of myself, and I needed that eighteen-year-old by my side as I faced the challenge of getting three children through their teenage years.  I wanted to gain some wisdom from that girl, who was both reckless and brave to a fault, and to do that I had to open the box marked Fragile.”

“In that box,” Hart continues, “nestled along with all my stored emotion, was a three-pronged mission, (1) figure out what had happened to Margo, (2), remember what had been going on with me, and (3) try to understand why her death made me so wary, for so long.”

This, then, is the thrust of a narrative that is as revealing as it is riveting.  It is here that Hart employs her superb investigative skills in attempting to solve the question of Margo’s death as a “study in silence,” and the abandonment of her body in a makeshift grave.  Here, also, she uncovers the couples’ entanglement with drug dealing and organized crime. Equally, Hart unearths a parallel story whose outlines were unclear to her at the time of her involvement with Margo and Howie.  And that is the story of the growing presence of organized crime in Stamford, aided and abetted by the local Democratic Party establishment and the participation in criminal activities of certain key members of the Stamford police force, including the drug trafficking that led to the deaths of Margo and Howie.

Having published two novels (Addled, 2007, and Float, 2013), along with numerous essays, short stories, and works of journalism, Hart is an accomplished writer of fiction and non-fiction. Everywhere in the narrative one experiences Hart’s novelist’s eye for detail, which helps to give the book its powerful sense of immediacy.

Hart’s story also has social and political implications.  At the time of the events described (and during the country’s Bi-Centennial Celebrations), Stamford was undergoing extensive Urban Renewal, so that the city could lure major corporations out of the nearby crumbling New York City.  In order to achieve this, blacks and other minorities had to be pushed out of neighborhoods that had long been theirs to make way for the high tax payers.  As a consequence, race relations, strained during the civil rights struggles of the 1960s, worsened, housing problems escalated, and Stamford became a more problematic city to live and work in, as it turned “whiter by the hour,” as Hart describes it.

Some of this Hart learned while living and working in the city and involved with Joe Louis, his family, and his friends, including Howie and Margo.  There is a particularly affecting picture of Joe’s jazz and gospel singer mother Georgia, with whom Hart remained close even after Joe’s death.  Though Joe had graduated from Columbia, much of his income came from gambling, drug dealing and flipping used cars.  He also ran unsuccessfully for public office.  As a consequence, Hart’s paychecks kept their often unstable living situations afloat.  Joe also became an increasingly heavy drinker.  A significant part of the narrative involves Hart’s attempts to come into her own as a person and a woman under the aegis of second-wave feminism, while trying to remain in a committed relationship.  Though Joe did not readily speak about it, the couple remained haunted by the deaths of Howie and Margo.

After the couple finally separated and Hart was living in Colorado, about to meet the man she eventually married, the story of Margo and Howie continued to affect her.   Her search for clues about their deaths, particularly Margo’s, as Hart traveled back to Stamford during the intervening years, searching through police records and the archives of the Stamford Advocate, tracking down people to speak with, and eventually writing about the case and her life in Stamford, constitutes one of the most dramatic dimensions of a book that will keep readers in suspense.

In the end, after all of her careful research and brilliant detective work, Hart returns to the potter’s field where Margo’s body had been found by picnickers.  It is there that she finally experiences a sense of closure.

“I had found Margo and with her, my younger self,” Hart concludes.  But in the process of this act of recovery, readers have shared the journey of a writer, who is as unrelenting in her pursuit of self-knowledge as she is redemptive of her lost friends, who, in part, enabled that important discovery. 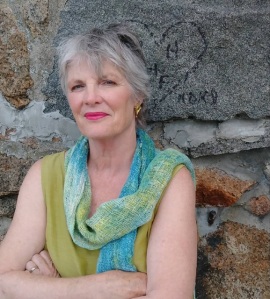 A Review by JoeAnn Hart 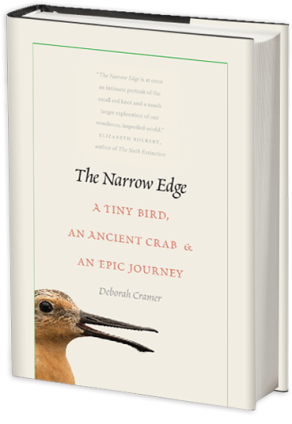 “When an extinction occurs, there is no way to know which species will be the next to cling to the hands of time.”

The “narrow edge” in the title of this engaging book by Gloucester resident, Deborah Cramer, evokes the image of comedian Harold Lloyd, in the 1923 film Safety Last!, teetering on a skyscraper ledge, clinging for dear life to the hands of a clock. It is an apt metaphor for the uncertain future of the red knot (“a small sandpiper about the size of a robin and weighing about as much as a coffee cup”), which roams the sliver of sand between land and sea, a precarious place to be these days. This indefatigable bird lives for five months on desolate tidal flats at the tip of South America, then, as if possessed, travels 9,500 miles north, following the coasts of two continents, to breed in the Arctic.,

In The Narrow Edge: A Tiny Bird, an Ancient Crab, and an Epic Journey, Cramer explores this flyway by plane, kayak, helicopter, and foot, feeding on history and science as she goes, wrestling with the consequences of human interaction with the natural world. Her journey ends at a scientists’ field camp in the most northern of Canada’s territories, where the red knot lays its eggs. The birds arrive with just the feathers on their backs, while Cramer is weighted down with supplies, bulky clothes, a GPS, and the requisite twelve-gauge shotgun to ward off polar bears. It was the worst summer for shorebirds in the field camp’s history.

In her travels, Cramer often sustains herself on pilot biscuits, but the red knot needs high protein fuel and lots of it, preferably the eggs of the homely horseshoe crab. Yet this living fossil, which has survived on Earth for half a billion years, is running out of breeding grounds. The beaches on which it lays its eggs are being destroyed from over-development, rising waters, oil spills, and industrial run-off. As if the crab didn’t have enough to worry about, it is also of considerable value to humans: Aside from its historical use as fertilizer and bait, the crab’s blue blood is used to ensure the safety of intravenous medical procedures. In theory, the blood harvest should not kill the crab, or at least not many, but Cramer’s research suggests another story—and so the red knot’s fortunes rise and fall with the crab’s.

Cramer walks and talks with a wide band of scientists and naturalists who are working against the clock to save the red knot, because if this shorebird disappears, it won’t be the only one, and we cannot predict the consequences. “The foundation of food webs may not be apparent until they fray,” she writes, citing the disappearance of the passenger pigeon with the rise of Lyme disease. (Read the book to discover the connection.) When an extinction occurs, there is no way to know which species will be the next to cling to the hands of time.

JoeAnn Hart, a long time Gloucester resident, is the author of the novels Float and Addled.  Her review first appeared in Orion, September/October, 2015.