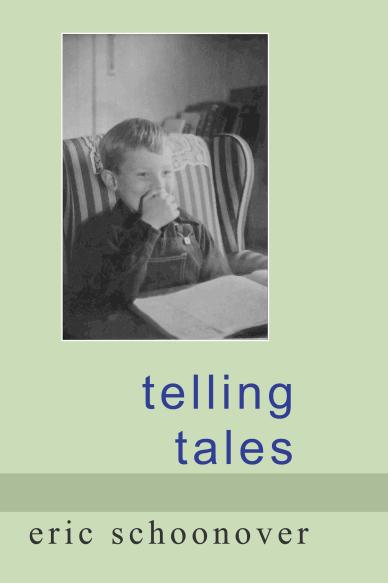 Telling Tales: A Gathering of Stories by Eric Schoonover

A Review by Peter Anastas

“We tell stories for as many reasons as we live. They celebrate the beginnings and endings of our lives. They are the hand that rocks the cradle, the hand that wraps the shroud. They give meaning to the long or short haul of our lives.” –from the Preface

In Telling Tales, Gloucester poet and novelist Eric Schoonover has given us a collection of essays as finely written as they are delightful to read.   Each essay explores an arresting theme and tells a particular story, so that in reading them we are doubly rewarded.

We experience the taste of dates in Egypt with their author, who shares his thoughts about the role of memory in our lives.  In an essay that dramatizes issues of class and companionship, we accompany Schoonover as a young college instructor, who travels from his Eastern American classroom to Washington State to join a fire fighting crew in the Palouse hills.  We’re with him in a car race in which a relationship is also explored, and we assist him in building “Tuva,” his Micro sailboat, which still plies the waters off Cape Ann (he also builds a bed for his grandson Jacob to whom the book is dedicated).  Most powerfully, we climb into the mountains of Switzerland, where Schoonover travels to scatter the ashes of his parents near the small Genevan village where the family spent several memorable vacations.

Yet for all their variety and Schoonover’s scintillating prose, these essays are seamlessly constructed, as befits the boat builder who wrote them.  The word essay comes from the French essai, which means “an attempt.”  In writing an essay one begins by setting down tentative thoughts about a subject.  In the process we may also be trying to discover what we actually think about that subject, and what we want to say about it once we begin to write.

Essays have generally been categorized as “formal” or “familiar.” Formal essays usually consist of an impersonal analysis of a subject, while familiar essays are generally written from a personal point of view and  tell us as much about the writer as his or her subject.

Our era may well be one in which we have witnessed the primacy of the familiar essay, through the popularity of personal essays and memoirs, the profusion of Op Ed columns, and, more recently, the explosion of individual blogs, in which writers write as much about themselves as they do about their subjects.  Yet the new digital technologies (not to speak of texting and Twittering) with their inherent demands to think and write fast, and therefore more superficially, have helped to create a literary culture in which care of construction and thoughtfulness of intent have often been eclipsed by the pressure to post or respond to other posts.  While this has arguably afforded more democracy of access and expression (everybody is now seen to be a writer), the inevitable consequence has been a sacrifice of depth.

For this reason Eric Schoonover’s Telling Tales is all the more welcome.   The personal voice is here in these wonderfully luminous essays, which are both autobiographical and a history of the sources and growth of a literary sensibility.  We come to understand who the author is through the gathering details of his life—fishing with his father as a child; experiencing his first misunderstanding by a teacher in the rural Western Massachusetts school he first attended, in a town where he was the only paperboy; teaching English and literature in a variety of settings; and traveling to remote places whose cultures fascinate him, with his family as a child and later as a mature traveler and writer

With this collection Schoonover has in effect restored the essay to its proper place as an invaluable yet ever flexible mode of expression and exposition, a means of coming at the world in multiple ways, while sharing with the reader what the writer has discovered during the journey.

In describing what he has set out to achieve in this rewarding book, Schoonover quotes Joseph Conrad’s own reason for writing: “I want to make you see.”   And we do see through Schoonover’s eyes some of the world he has experienced and remembered, just as we feel through language that rises to poetry what he has felt and wishes to share with us.

Telling Tales may be a slender book in terms of page length, but it is brimming with the kinds of wisdom, humor, insight and sheer intelligence that are certain to make a lasting impression on the reader.

Eric Schoonover is a writer, boatbuilder and watercolorist, who lives in Gloucester in a small 1735 Cape Ann cottage with his wife, also a writer. He is the author of the award-winning The Gloucester Suite and Other Poems and a novel, Flowers of the Sea. His latest book, Telling Tales, has just been published.